This post is the fourth in a series on management “gurus” who have influenced and shaped the products and services we offer at PGS. To start with post one, click here.

The influence of Ichak Adizes and his work on corporate lifecycles

The fourth in our blog series on “influencers” of PGS and our products centers on the work of Ichak Adizes. Adizes published his seminal work, Corporate LifeCycles, in 1988. I was late getting familiar with this work. In fact, it took several persons I respect hammering on me before I got it. But, boy, did I get it.

The book (now out of print, but replaced by Managing Corporate LifeCycles) was a stunner. I probably highlighted a third of the text. It’s most significant contribution was to define a true destination for organizational development, an illusive state Adizes called Prime. It had been my experience that most board members and a number of executives had no such clear destination. They wanted high performance, but they weren’t clear on the conditions needed to get there.

If you don’t know where you are, and you don’t know where your are going, you are lost. You need both points of reference to not be lost. My experience has been that many CEOs and board members were excited and relieved to have these two points defined. (Knowing where you are will be the subject of the next blog in the PGS “masters series” and will deal with Ichak’s former partner who developed the instruments to determine this).

Just understanding the components of the Lifecycle model (ranging from Birth to Death), i.e. even without a diagnostic instrument, leadership could understand: 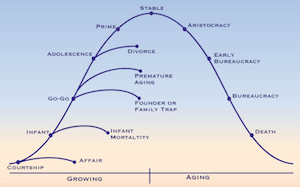 I got so excited about the potential of this model to aid our clients that I traveled to San Diego to study with Adizes. He was more riveting in person than in print. His stories re. application of the model were very compelling.

Assessing an organization’s position on its lifecycle became an optional tool available in the Internal Assessment phase of our Vision Navigation® strategic planning process. We have deployed this model and the associated diagnostic instruments with a number of clients during Vision Navigation® with great success.

In addition to understanding the organizational lifecycle, Adizes described the four elements or forces necessary for successful change in an organization; a concept he called CAPI or Coalesced Authority Power Influence. This concept became part of the answer to the puzzle of why our early efforts with Continuous Quality Improvement were not getting results and explains why national data reveals that two-thirds of change efforts fail. Understanding these forces, diagnosing whether you have them in place, putting them in place and maintaining all the elements are keys to managing change. CAPI is now integral to our Process Advantage® approach to performance improvement.

If you have interest in Adizes’s model, e-mail us. We would be happy to send you an article summarizing it and let you know options for putting the model to work for you. And if you are interested in our other posts in the series “Who Gave You That Idea?”, click below: