As I have expressed often in these posts, vision plays a critical role in an organization’s ability to achieve high performance. But there is a balance that must be maintained in order for the vision to fulfill that role successfully, whether the vision is on the organization’s strategic plan or a small departmental project. We have seen organizations falter on both sides of that balance, and here’s why.

Loss of an inspiring vision

Awhile back I was involved in trying to resurrect a change management project that we had been a part of in the early stages. At that time, the leader had a very strong vision, but wasn’t sure how to execute on it, so brought us in to help with the planning. We showed him how to create a design for process(es) that would achieve his vision and helped him put in place the implementation plan for the journey to get there. 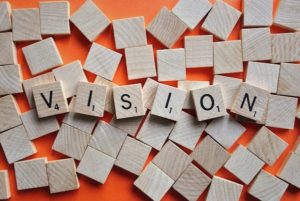 However, changes in the organization’s structure as well as economics wreaked havoc well into the implementation plan. Eventually the project began to sputter, then stalled altogether. Soon after a new leader took the helm, and we were brought back in to try to resuscitate the project.

What struck me as I reengaged with the group was how important the previous leader’s vision was to surmounting the challenges that had halted the project, and how the absence of  his compelling vision now made resurrecting the project virtually impossible.

In the beginning, the leader’s passion for and level of detail in his vision was successful in getting fiefdoms within the organization to unite behind trying to make his vision a reality. The vision was rather like an elixir that treated all the ills brought about by day to day disagreements on how it should be, who did and did not do what, etc.

But, when turnover and economics thwarted full execution coupled with the exit of the visionary leader, the vision waned to the point that no one could even recall what it was. The new leader sought to resurrect the project, but the project team could no longer describe a clear picture of where they were headed.

On many occasions, I have witnessed the power of what a strong, compelling vision can do. Witnessing what happens when the vision disappears was a new lesson for me. It does not matter whether you are talking about the vision for the organization as outlined in the strategic plan or the vision for a small change project you are implementing in a single department. Leaders must take stock and honestly answer this question: does this vision compel others to action and serve as a focal point of efforts? If not, what is missing?

On the opposite end of the spectrum from a lack of vision is an overly ambitious vision. I recently had coffee with a CEO with whom I had worked for many years completing strategic planning, board training, CEO evaluations, etc. The company had fallen on bad times prior to his moving on and upon reflection, it was his view that a vision that was too optimistic (i.e., unrealistic) was, in part, the beginning of the downturn.

Those of you familiar with our Vision Navigation® strategic planning process know that we borrow from Collins and Porras and their book, Built to Last, and recommend adopting a BHAG (“Big Hairy Audacious Goal”) that has a clear finish line, acts as a catalyst within the organization, aligns resources and calls the group to higher performance.

Collins and Porras state that the BHAG should be just on the edge of real, that it should have “gulp factor”. That is, you are a bit scared to share it because you know you will be held accountable to accomplish it. Well, the organization in question created such a vision and it was indeed lofty. In this case, a revenue growth goal over a sustained period. From the vantage point of the parent company, the aggressive vision was doable, but for the subsidiary managers tasked with meeting the numbers, it was unreasonable.

My friend relayed that the vision put pressure on subsidiary managers to manufacture financial projections that showed that they would achieve the target growth rate. As we talked, I determined that it was not the vision itself that wrought the problem, but rather the failure of leadership to critically examine the assumptions behind the numbers and the true competitive position of each subsidiary.

The call to action of the stretch vision did not translate into strategic planning at the subsidiary level that had real integrity. There was never a process to either seriously question the assumptions underlying the big picture financial projections on the one hand or to appropriately plan how to get there on the other. By the time it was understood through financial reporting that the goal was too aggressive, it was too late to turn around what became a serious cash crisis for the organization. Had upper management or the board challenged the basis for the original assumptions, then the changing trends and conditions in the markets might have been foreseen and some of the bleeding prevented.

It is possible to create a vision that is laughable or beyond reality for those tasked with achieving it. If you do so, it will be demoralizing rather than galvanizing.

In the end, financial projections and, for that matter, strategic plans are only as good as their underlying assumptions. If a vision is aggressive to the point that you question its integrity, then you must challenge the assumptions. Specifically, ask:

If the answers satisfy you enough to move forward, begin gathering data to monitor and validate or revise those assumptions on an ongoing basis. You may well be able to spot a change in the underlying assumptions that were the drivers of your original financial predictions well before you see the actual numbers change on your financials. Those who spot those changes will succeed far better than those who miss or ignore them.

Without a vision, your staff may work hard and be well-intended, but they are directionless in their efforts, i.e., the ship has no rudder. A sound vision is the catalyst that brings down departmental silos, that inspires staff and managers, that propels the organization or team forward in a unified, aligned direction. The caveat? Make sure that vision is a lofty, but doable stretch based on sound assumptions that all leadership can champion.