Micromanagement is best defined as a pattern of over-involvement in operational details. It means needlessly slowing down the pace of progress, growth or improvement without adding any value. That is, the added oversight or approval step consistently fails to result in 1) avoidance of a mistake, 2) an improved strategy or action plan, 3) better execution, or 4) a better outcome. Thus, the cost of the delay in making a decision is not off-set by any gain.

Ultimately, it is a lack of trust of one party in another to make sound decisions or effectively execute. 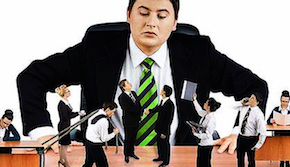 The impact of micromanagement is that it tends to suppress the potential contribution of the person being managed. The effect is less motivation, less innovation, loss of confidence and waste of time. Over time, this leads to good people leaving or in some cases just living with it, but under-performing what they could potentially contribute to the organization. The impact of micromanagement changes the organizational culture to one in which mistakes are punished. Such a culture results in an organization that doesn’t make needed changes, doesn’t innovate, under-performs and, in some cases, fails.

Micromanagement can occur relative to any given decision because of the circumstances that surround that particular decision; e.g. the cost of a mistake, the players involved, political sensitivities, etc. In my view, micromanagement does not exist as a problem unless there is a clear pattern of occurrence no matter the circumstance; in short, it is a symptom of a disorder in need of correction. Therefore, a single or even several instances of unwarranted oversight can arise from circumstances without a pattern or true problem of micromanagement existing.

Micromanagement can occur at all levels: supervisor to subordinate, middle manager to supervisor, CEO to middle manager, board to its committees or board to CEO. In this article, we will focus on the board-CEO relationship only, however many of the theories and remedies can be applied to all situations

Why is this important?

If there is one trend that all organizations face, it is that competition grows more intense as the pace of change accelerates. This is true in both the non-profit and for-profit sectors.

Market advantages are momentary, deals must be closed or they migrate to a new buyer/partner, delays mean increased costs, and the inability to act erodes confidence both inside and outside the business.

If you simply look at the definition of micromanagement, it is by its nature wasteful, i.e. it adds cost without adding value.

Good CEOs and management teams want to move quickly. Undue delays frustrate their progress toward goals (and usually personal bonuses), result in discontent and ultimately turnover in management. Lastly, a board that sets high performance targets for management and then prevents them from getting there is viewed as unfair at best.

At the board level relative to its committees, if the work of committees is always questioned and re-done by the full board, committees lose commitment and cease doing their work, adding cost to each decision.

Add these together, and you have a significant problem.

Asking the CEO is Not the Answer

Ask the vast majority of CEO’s and they will tell you that their board is a net drain on their time and that most boards micromanage. A good CEO has a plan, has confidence in herself and her team, is entrepreneurial and impatient to move when conditions are viewed as ripe for change. Stopping to get board approval is a needless delay from the CEO’s perspective. Good CEO’s simply say, “just tell me where you want me to go and watch me take you there”.

It is only the most talented boards and the wisest CEO’s that combine to utilize the board-management relationship in a way that consistently adds value to management.

Most boards are in a fiduciary role of merely preventing harm from being done. They don’t have the expertise, knowledge of the business or commitment of time to truly improve upon the decisions of management. Instead, it is their role is to slow the train to be sure it does not run off the tracks. Before proceeding, a decision is reviewed and, if no potential harm is detected, the “proceed” command is given. If the organization is about to run off the tracks by proceeding with management’s plan, then that board is adding value by calling a halt. If it is not, then the board is a net cost to the organization, i.e. needlessly delaying progress.

In defense of this fiduciary role, recent corporate history is replete with stories of board’s failing to provide adequate oversight and riding the agenda of the CEO too long. Finding the right balance between micromanagement and irresponsible trust in management is the challenge for all boards.

In sum, asking the CEO whether micromanagement exists will not tell us much; they will almost always answer yes. This can’t be our test of the existence of micromanagement, so how does one know?

The following are offered as conditions which, if extant, often lead to micromanagement. If these conditions exist in your organization, then you should dialogue with your CEO as to whether micromanagement is indeed a problem, and what the solution might be:

I recommend that, at the conclusion of each meeting, directors and CEO be asked by the chair to speak on how the meeting could have been improved. If several members mention the symptoms above in their comments, then it is time for honest dialogue on whether the lack of trust is impeding organizational performance and what to do about it.

Most boards don’t have this dialogue until it is too late and the relationship with the CEO has eroded beyond the point of repair. It truly takes courage by both sides to confront this issue. But, no one has said effective governance is easy.

So, what do these symptoms of micromanagement look like when they are in full bloom in the organization? Here are some scenarios observed over many years:

If concerns are legitimate, dialogue with the CEO to gain a commitment to improved performance, if not legitimate, then the board has to police itself and deal with a director who is doing harm to the common good of the organization.

The most challenging and courageous step is to self-declare that you have a micromanagement problem. Micromanagement is the silent killer of many a board-CEO relationship – silent in that it never gets discussed, the relationship erodes, a “divorce” ensues, only to see the pattern repeated with a new CEO.

When you are clear that you have the problem, consider one or more of the corrective steps listed below.

These tools will give you control of the “big picture” provided you have the knowledge to use the tools effectively. If not, make getting that knowledge a high priority. Without it, you will continue to micromanage. It is my view that all boards know they should control something, if they don’t know how to control the big picture, then they will micromanage the minutia they are familiar with.